Warning: Parameter 2 to wp_hide_post_Public::query_posts_join() expected to be a reference, value given in /home/customer/www/3dprintingforbeginners.com/public_html/wp-includes/class-wp-hook.php on line 307
 Our Take on the FabCon 3.D | 3D Printing for Beginners 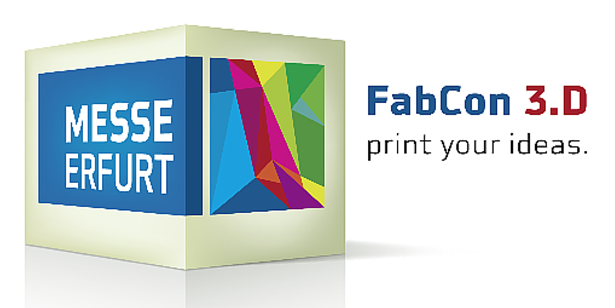 Our Take on the FabCon 3.D

We have just spend the last couple of days at the FabCon 3.D, one of Germany’s most prominent 3D printing expos. FabCon 3.D is a consumer/pro-sumer oriented event and 2014 only marked FabCon’s second anniversary.

The fair took place in Erfurt, from May 15 – 17 which gives it one day of overlap with the Rapid.Tech, a rapid prototyping fair aimed at a professional audience taking place in the same location.

For those of you who couldn’t make it, here is a review of what we discovered and found to be worth sharing.

Amongst the many great things that we saw at Fabcon 3.D there were a few products and projects that captured our attention and deserve a special mention:

The Dutch startup ColorFabb, known for its innovative 3D printer filaments, was showcasing its latest development: BronzeFill, a PLA/PHA based compound that contains up to 80% fine bronze powder. The filament is about four times heavier than standard PLA which makes the resulting 3D prints feel like real metal. Additionally, the BronzeFill prints can be polished giving them a nice metallic shine which opens up a whole new host of applications for this filament.

BronzeFill had the floor buzzing: everyone we bumped into was asking if we had seen this new filament and people were genuinely impressed with the sample prints. Looks like ColorFabb is onto something big here. However, we’ll all have to sit tight since BronzeFill is set to be released only in August this year. We certainly can’t wait to get our hands on a spool!

TriScatch 3D is a simple, freehand 3D scanning system which allows you to use your digital camera or mobile phone to digitize objects in order to create 3D printable *.stl files. What struck us with this system is its ease of use and the fact that it doesn’t require any specialty equipment which makes 3D scanning technology accessible to the broader public.

Now, we can’t say anything about how well the system works though the videos at the stand looked pretty convincing. However, the guys at Beealize (the developer of the TriScratch 3D software) were kind enough to offer us the possibility to test their product. We’ll get this test set up and report back as soon as we have first results.

The Delta Tower RTA features an impressive build volume with a 300mm diameter and a maximum height of 560mm. The size of the 3D prints you can make with these printers is truly spectacular. With a price tag of around 8000 Euro this is probably not going to be your kid’s next birthday present though! 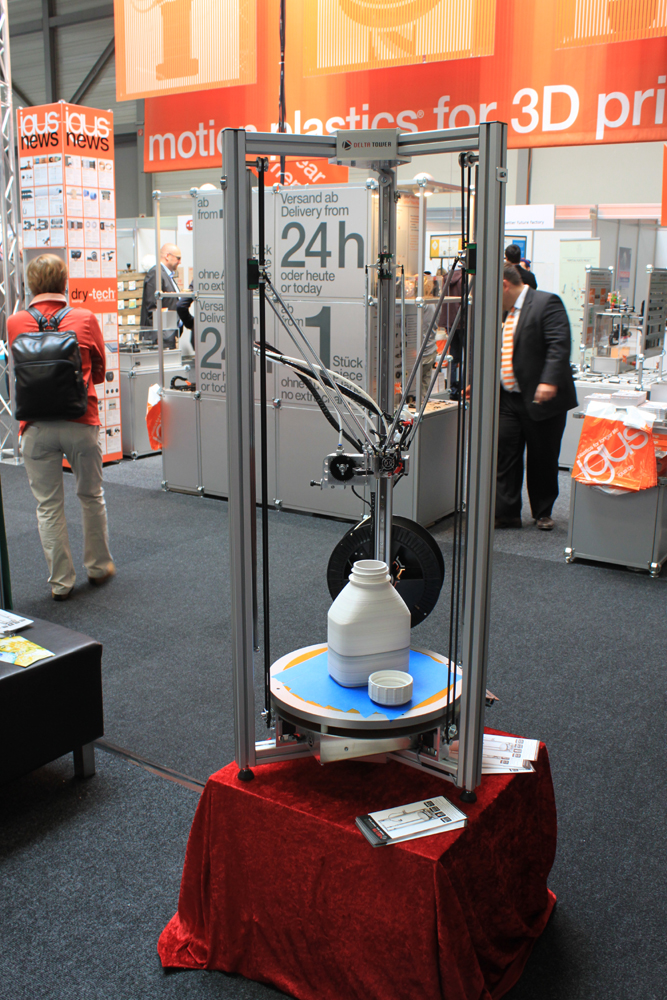 While this project is not strictly 3D printing related it still deserves a special mention here: Mister Beam is a project by a team of three designers/developers from Munich. They have developed a DIY laser cutter and engraving machine for paper, wood, plastic and other materials. Using an affordable laser diode the developers succeeded in making engraving technology accessible for everyone. Mister Beam will retail in two sizes with a target price of around 300 Euro for the small version and around 500 Euro for the larger machine.

The project is currently being crowdfunded on kickstarter.com and though the initial funding target of $45.000 has been exceeded by over 250% you can still chip for some of the stretch goals. Make sure to check it out!

Included in the ticket price of the Fabcon 3.D is a series of lectures on 3D printing related topics. This year’s line up of speaker featured some very prominent characters in the space of 3D printing such as Josef Prusa, David Braam, Filemon Schoffer and Jérémie Francois.

As the speeches were given in parallel to the expo it was impossible to attend them all and we are sure we missed a few good ones.  Of those that we attended below are the most noteworthy. Note that all speeches have been recorded and will get published on FabCon 3.D’s Youtube channel so you can view the presentations, even if you did not get a chance to attend them.

Fair Trade Filament – Why does it matter? (William Hoyle)

Techfortrade is a UK based NGO aimed at leveraging technology and innovation in order to improve the livelihoods of some of the most needy communities around the world. William Hoyle, the NGO’s Chief Executive identified an opportunity where 3D printing has the possibility to alleviate poverty by empowering communities of waste pickers in India.

In India a waste picker earns $0.15 for every kg of plastics that they collect. At the same time, 3D printer filament which is made of the same base materials retails at $30 per kg. The Ethical Filament Foundation wants to make sure that the waste pickers get their fair share of the $29.85 gap between the raw material and the retail product.

The idea is to upgrade the skills of the waste pickers to higher value added jobs by having them not only collect the plastic waste but turn it into 3D printer filament which they can sell.

In order to alleviate any quality concerns that may arise with such filament, the foundation is working with the University of Michigan to create a quality standard for the fair-trade filament. A pilot project has been set up in India and the first filament is expected to retail in the summer.

Fairtrade Filament strikes us as one of the few very credible initiatives that could indeed change lives for the better. Whereas there have been many grandiose claims as to how 3D printing will change the world, this project may actually change the world for those that need it most.

David Braam is the programmer behind Cura, the open-source slicing software developed by the 3D printer manufacturer Ultimaker. As we use Cura for most of our prints, hearing David speak and give some insights into his work was highly exciting.

David’s speech ‘Open Source Additive Manufacturing software – Ahead of the market by sharing’ was focused on explaining why David (and Ultimaker) believe that an open-source approach to software development is superior to a closed approach. David told the story of how he was overwhelmed by the 260 different configuration settings that he faced the first time he tried to use Skeinforge (a open-source slicing engine). Today, Cura has 30 settings, making it easier to use and faster than Skeinforge. However, Cura could never have been developed if Skeinforge had been a closed software.

The development of Cura is a perfect illustration of how a great software was created by relying on the input of many. David insisted on the fact that even if he is the public face of Cura, he is not the one with all the great ideas. He relies on the contributions of the user community to keep developing and advancing the software, something that would not be possible without an open-source approach.

It is great to see that, despite their commercial success, Ultimaker stays true to the tenets of the RepRap project by contributing to the community with their open-source developments.

Keep up the good work David, the community is looking forward to the next releases of Cura! 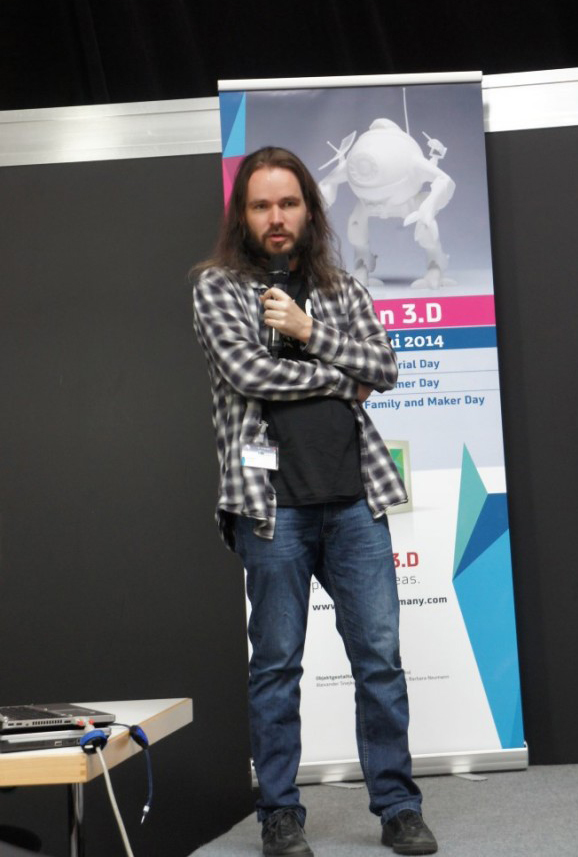 The talk by Filemon Schoffer (Community Manager at 3D Hubs) was another one that we were looking forward to attend. Having read about 3D Hubs before, we keen to learn more about one of the fastest growing platforms in 3D printing today.

The basic principle behind 3D Hubs is simple: 3D Hubs serves as a platform to connect 3D printer owners with people who need 3D prints. The current world population of 3D printers is estimated to be around 100.000 machines. However, these tend to sit still for 95% of the time. 3D Hubs offers 3D printer owners the opportunity to use their idle capacity to earn some money by making their printers available for local 3D printing demand.

Launched only in May 2013, 3D Hubs is now the world’s largest network of 3D printers, capturing somewhere between 5 and 10% of the global consumer 3D print capacity.

As Filemon explained, 3D Hubs may well digitize the distribution of products in the same way that Spotify has done for music. Today, the majority of prints ordered via 3D Hubs is in the space of prototypes and hobby applications but the trend is expected to evolve towards fashion and home products as the market matures.

However, no matter how keen 3D Hubs are on the world of digital products, they still like to keep a firm grounding in the real world. 3D Hubs is very much a community driven company and they put significant effort into growing their community by organizing local meet-ups. Currently around twenty of these face-to-face meeting take place across the globe every month.

Filemon’s speech certainly inspired us to join 3D Hubs. In fact, we had been thinking about it for a while but we’ll now register our printers and test the platform. Stay tuned for updates as we will report on our progress.

In summary the FabCon 3.D was a event worth attending. Whereas the fair might not have impressed by its sheer size, it made more than up for that with its cozy atmosphere and ease of access to some of the industry’s top movers and shakers. Walking into the exhibition hall on Friday morning we wouldn’t have thought that come Saturday afternoon, we would have had good discussions and drinks with David Braam, Filemon Schoffer and Jérémie Francois. We knew these guys due to their online presence but meeting them in person is really what made it worth attending FabCon 3.D.

The only sour note was the fact that not all exhibitors stuck around until Saturday afternoon, the official end of the fair. Sadly, the stands of Protocow, the Perpetual Plastic Project and others we already empty by Friday afternoon. As we discovered by talking to other exhibitors, Wednesday would have been the day worth attending since the fair was double the size with all the exhibitors of both the Rapid.Tech and the FabCon 3.D being present.

Still, we will certainly be back for the next edition of FabCon 3.D!

In case you missed the FabCon 3.D but still would like to attend a 3D printing fair this year, make sure to check our our 3D Printing Fairs & Events listing.