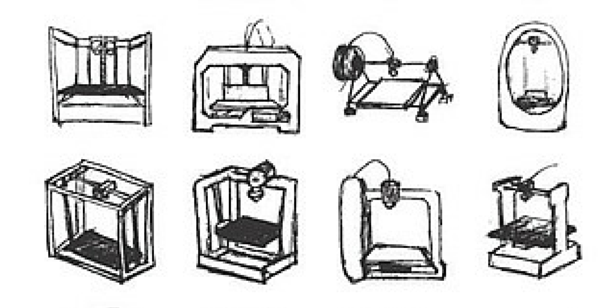 A new book that recently hit the book shelves caught our attention: The Book on 3D Printing by Isaac Budmen and Anthony Rotolo. As the book is positioned as resource for 3D printing beginners we figured it deserved a closer look.

For anyone buying or using a 3D printer the book promises to demystify the topic of 3D printing by covering a range of topics such as the 3D printing industry, 3D printers (including machine features, materials and online communities), 3D modeling software and more.

The book is split into two parts: the first half serves as an introduction to the history and evolution of the technology whereas the second half is aimed at explaining readers the inner workings of 3D printers.

Unsurprisingly, the first chapter of The Book on 3D Printing is a general introduction to the topic of 3D printing. The authors briefly touch on the most common types of 3D printing/rapid prototyping before moving on to the uses of 3D printing and the state of the 3D desktop printer market.

Chapter 2 takes a closer look at Fused Filament Fabrication, the basic working principle behind 3D printers today. This chapter touches on the prevalent material types such as ABS, PLA and PVA but also covers the more experimental materials which are still under development.

The following chapter talks about the main manufacturers and most common machine types. The history behind Makerbot Industries is covered in some detail; other companies mentioned are 3D Systems and Ultimaker.

In chapter 4, the authors take a look at the phenomenon of crowdfunded 3D printer development projects. The authors highlight some of the campaigns which attracted huge amounts of funding but also point out that most of these project are yet to deliver on their promises.

Chapter 5 starts to be more hands-on by delving into the modeling of 3D objects. The chapter covers 3D modeling software packages and talks about how to prepare an object for printing. The concepts covered are: model slicing, print resolution, overhangs as well as shell and infills.

Chapter 6 ‘An Internet of Things’ describes how the digital distribution of products has already started to affect our lives. The authors describe how services like Shapeways, Sculpteo, Ponoko and model repositories such as Thingiverse can be used download, print or buy 3D objects.

In chapter 7, Budmen and Rotolo give readers advice on how to select a 3D printer. They explain how the main features such as chassis design, build volume, filament material, single or dual extruders, print resolution and speed affect the capabilities of a printer.

Part two of the book, ‘Inside a 3D Printer’, starts with a chapter on X, Y and Z axes, explaining the basic coordinate system one needs to be familiar with in order to understand three dimensional fabrication.

Chapter 9 covers the build platform (the surface on which a 3D printer makes an object). The authors explain how build surface treatments can be used to get optimum print results, how to properly level the build platform and how to remove the printed objects.

Chapter 10 talks about the extruder, a key component of any 3D printer. In some detail this chapter explains the advantages and drawbacks of the different feeding mechanisms, temperature sensors, extruder types and nozzle sizes found on the most common 3D printer types today.

The final chapter briefly touches on the electronics of 3D desktop printers. The writers describe the functions of the motherboard, the brains of any 3D printing machine by taking the reader through some of the key electronic components such as end stops, stepper motors and power supply.

The Book on 3D Printing is an easy read and a good introduction to the topic of 3D printing for anyone interested to learn more about this exciting topic. However, as for similar books in the 3D printing category, the book does not delve into great detail for most of the subjects it touches on.

For me, the strongest and most interesting part of the book is Part Two, which covers printer design and key printer features. I found that I could learn something from this section of the book despite owning my 3D printer for a while now. It was informative to read about how certain features can influence the performance of a 3D printer precisely because I experienced some of the referenced issues with my Ultimaker printer (ex: warping of ABS printed parts on a non-heated print bed).

What I found slightly disappointing is the fact that the book does not really give any good examples of what a user could expect to produce with their 3D printer. With Isaac Budmen being such a prolific 3D print artist and inventor the book could have greatly benefited from concrete examples of how 3D printing can be put to use today.

Still, I’d recommend this book if you are looking for an easy and quick way to get into the subject matter of 3D printing and some of the technologies behind 3D desktop printers.

Our rating: 7/10
Buy The Book on 3D Printing on Amazon